The traffic jam caught us off guard. There must have been an accident on the 101. I used Hilary’s phone to search for an alternate route. We found one that would supposedly shave 17 minutes off our journey, but as we exited the freeway we came to a grinding halt. It looked like everyone else used GPS at the exact same moment to find this route. We called the doctor’s office to say that we’d be late. We moved at a snail’s pace at first, but once we got through a few stoplights, we picked up speed and finally made it to our destination about 15 minutes late.

Mom has a standing appointment with Dr. Galligan every two weeks right before her chemo infusion and the doctor has 15 minutes blocked out for her. We weren’t sure if we’d still see her or if another doctor would have to cover for her. Mom checked in at the front desk and about 30 seconds later, the nurse called out, “Sylvia?” My mom, dad, sister and I followed the nurse and then all crowded into the examination room. Dr. Galligan arrived shortly after. I had heard her voice before because Dad had sent me recordings from past appointments. It was nice to finally meet her in person. From those recordings I knew that she was direct, no nonsense and good at digesting information, zeroing in on a problem and finding a solution. She helped us determine that Mom’s weight loss and vomiting were probably due to the cold and cough she was still getting over. The cold decreased her appetite and the cough activated her gag reflex. She stressed that Mom needed to put some weight back on to be strong enough for another round of chemotherapy. That morning she weighed in at 107 pounds, two pounds less than at her previous appointment. Dr. Galligan informed Mom that she would not be doing chemo that day because her white blood cell count was too low. She would have to take a blood test the following week and try again.

At this moment I thought it would be appropriate to ask, “At what point does she stop the chemotherapy? For example if she keeps losing weight and she can’t tolerate it anymore, then do we move on to another drug?” Dr. Galligan replied that she would do chemo as long as she could tolerate it. And she would stop the chemo when the chemo stopped working. Mom’s most recent CT scan revealed that her bone lesions looked “stable” so this was a sign to keep going. I asked if she thought there might be any other drugs we should be using in conjunction with chemotherapy. She said no, it was better to err on the side of caution because sometimes a mixture of medications can be deadly. I asked about the possibility of using immunotherapy drugs instead of chemotherapy, and mentioned a few drugs I had researched that were being used to treat stomach cancer. She said no, they don’t have the data to back the use of these drugs as a first line therapy. I pointed out that the published studies I found involved using the drugs as a second or third line therapy after chemotherapy. I said, “Doesn’t it seem more likely for these drugs to fail because the immune system is already severely compromised?” Her face turned stony. She responded, “No, we don’t see that.” I went on, “I’m wondering if you can tell me why this drug Neuratinib was recommended for her.” Dr. Galligan said it was based on Mom’s genetic biomarkers. I asked, “Is that related to the HER-2 gene? I’m still not clear if she is HER-2 positive or negative.” She replied, “I’d have to look that up for you.” I continued, “Okay, I’m just trying to understand why certain drugs are being recommended for her, like the clinical trial for FP-144. I didn’t see how that was related to her genetic biomarkers. Can you explain that?” She tapped on her computer and said distractedly, “Well, that was a long shot.” I could tell the conversation was coming to a close. She said, “I don’t want to keep you all, and I know you arrived a few minutes late so if you’d like to make another appointment to discuss all these things we could do that.”

She was right. We were late. I also knew we would not have time to squeeze in another appointment before I returned to Paris. I wanted to mention that, but decided not to push it. I would email her assistant and ask follow up questions later. She must have sensed my disappointment. And maybe she felt she had to defend her experience and credentials because she suddenly said, “I’m having a hard time condensing 12 years of oncology into a sound bite.” She went on to explain how they typically fight the disease, adding that maybe we could look into combining Neuratinib and chemotherapy if Mom’s body could handle it. (Neuratinib comes with its own set of side effects.) The doctor still felt Mom would probably have better results if they separated the two treatments. She reiterated that there were hundreds of genetic biomarkers and we still don’t fully understand how each one relates to cancer and allows it to grow. I nodded my head, consuming everything and attempting to draw my own conclusions. “So I guess it’s best to come at this disease from as many different angles as possible.” “Yes,” she agreed. The showdown was over. She told me she would send me the results of my mom’s genetic blood test so I could look at some of the relevant biomarkers and I said, “Thank you.”

I walked out of the office feeling a little stunned and confused by the conversation but also relieved that Mom was finally getting a break from chemo. All she had to do was go upstairs to get an Xgeva shot to strengthen her bones and she was good to go. When the nurse pulled up her sleeve to give her the shot, Mom’s arm looked skeletal. We needed to put some meat on those bones. I had an idea. I knew of a diner in Sausalito where we could get some brunch. Afterwards we could stop at the park on Horseshoe Bay, located right underneath the Golden Gate Bridge. We asked Mom if she was feeling up to it and she said yes. The drive through Sausalito was gorgeous. The sun shone on the water and made it sparkle like liquid sapphires. We had a delicious brunch at a restaurant called Fred’s Place. I had Fat Fred’s French Toast and a side of Millionaire’s Bacon. Mom ate half of a huge Swedish pancake. Yay!

After brunch we went down towards the water to walk around and take some pictures. Now that Mom is so skinny she gets cold easily, so I made her switch jackets with me. I figured my thick coat would be warmer. I had also brought some berets from Paris for us to wear. I imagined us wearing them during chemo, but now that we were outside in the cold it totally made sense to put them on. Mom was game. Dad was embarrassed, especially when we asked a guy who happened to be a fellow Marine to take our picture. Hilary wasn’t so sure about the color I picked for her but I thought she looked stunning in her raspberry beret!

After we snapped some family pics Dad was ready to rip off the beret and go walk the dogs. Us ladies stayed on the pier so we could take a few more memorable photos. For as long as I can remember, my sister and I have been fans of over-the-top photos. Our Glamour Shot from 1991 is proof of that. 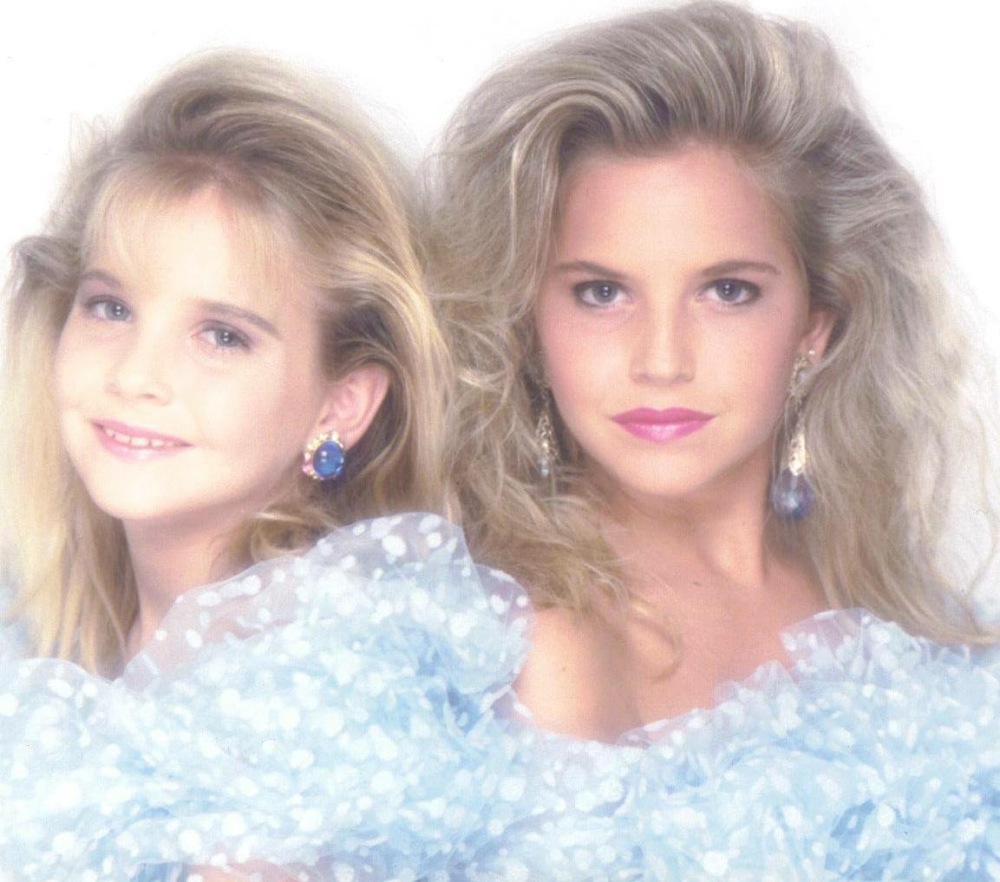 We actually took another Glamour Shot a few years after this gem. I wish I could find a copy. The image wasn’t as dramatic as the first one, but the experience certainly was. I believe I was 18 and Hilary was 13 at the time. We decided to do this as a gift for our parents and grandparents because who wouldn’t want another Glamour Shot of us? We arrived at the Brea Mall ready to make magic. The Glamour Shot experience is interesting because your photographer is also your hair and makeup artist. Our heavyset, brunette, multi-talented shutterbug twisted our hair up in curlers and then got out his makeup kit. As he applied the last bit of eyeshadow to our upper eyelids, he took a step back and ceremoniously said, “Showcase.” To this day, when Hilary and I put on makeup together we always punctuate the process by saying, “Showcase.” We’ll occasionally throw it out when taking photos as well, which usually makes us cry with laughter.

We laughed a lot in the shadow of the Golden Gate Bridge. Mom was hamming it up for the camera, and her “showcase” face was clearly the winner. It was good to be outside together getting some fresh air and soaking in the majestic beauty of the area. Although the sun was shining, it was still a little cold and windy, so after we captured our shots, we ran back to the car and cranked up the heat while Dad finished walking the dogs. As soon as we got home, Hilary and I drove to the pharmacy to pick up some cold and cough medicine for Mom. And when she was feeling hungry again, we had plenty of See’s Candies ready and waiting for her. 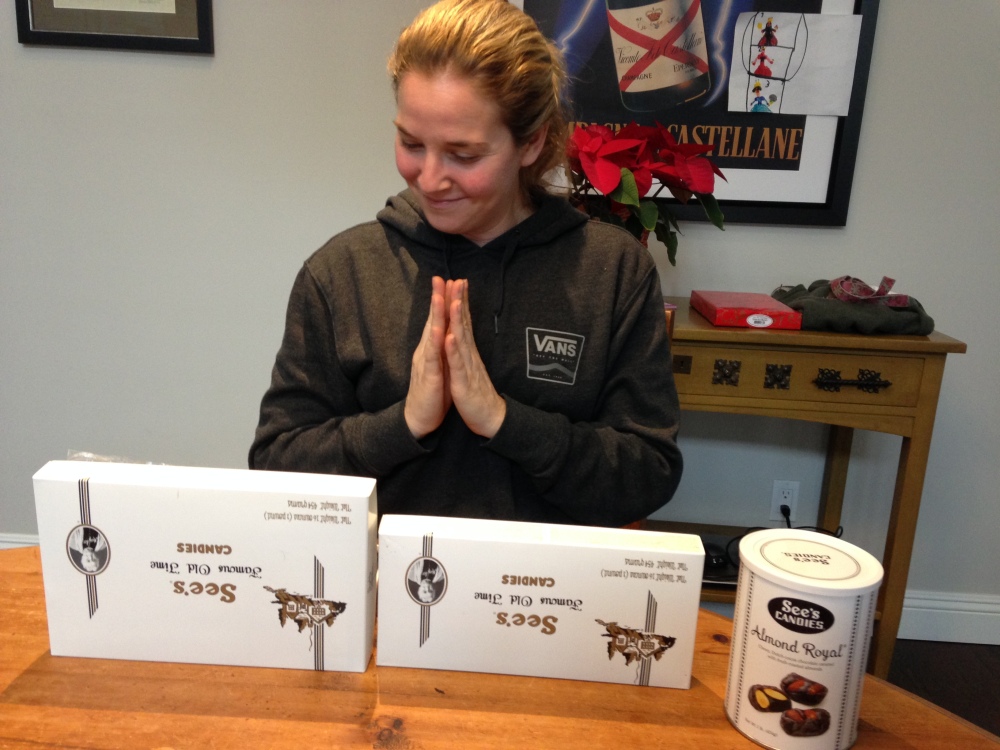 From this point on, Mom really turned it around. Her appetite increased as did her energy level, which enabled us to do things like go shopping, get lunch at our favorite Thai place and visit with friends. I knew she was feeling like her old self again when she asked if she could wash my purse. I have had the same bag for years (I call it my “mom bag”) and it has been dragged all over the place, spilled on, overstuffed to the point of ripping holes in the interior and more. Mom washed the purse, air dried it AND sewed up all the holes. When she was done with it, it looked like a brand new bag. Now I hate to compare my mother to an old bag (sorry Mom!), but the similarities here are undeniable. After a few days of rest and TLC, she was like a new person. Was it the cold medicine? The CBD oil? The break from chemo? Family time? The See’s Candies? Probably all of the above. 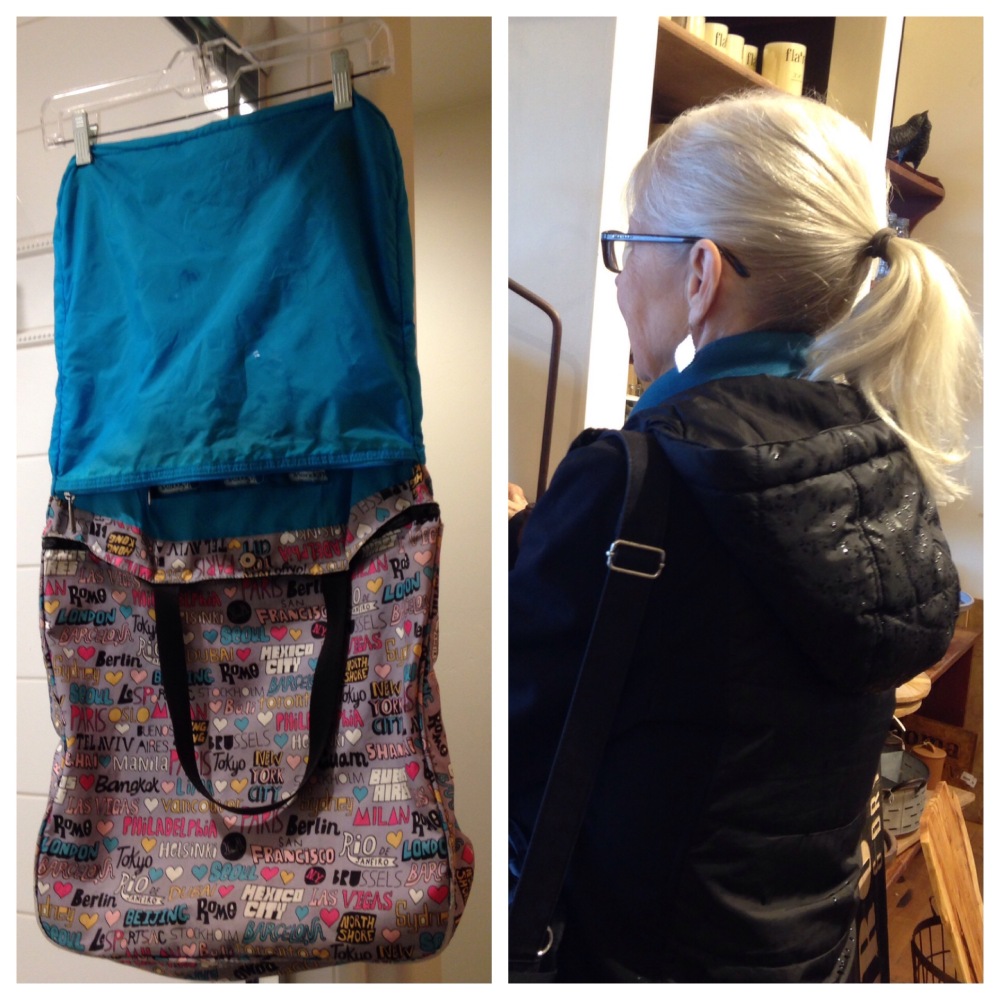 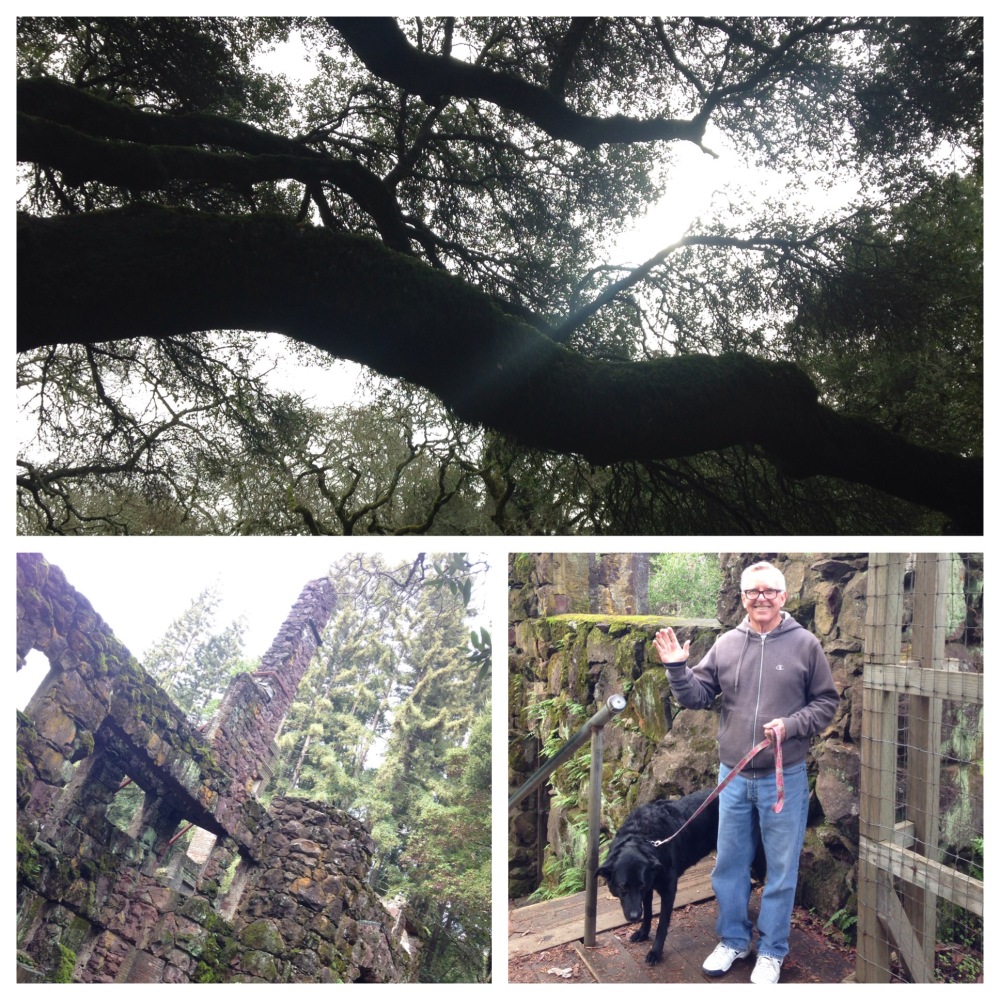 One thing I am sure of is that this trip was really good for me too. My favorite moment of the week with my dad was the day we walked the dogs through Jack London State Park. Being immersed in nature does wonders for the body and mind. I also loved staying up late with my mom every night watching Fixer Upper and exchanging foot rubs. At the end of the week I felt both refreshed and confident that Mom was going to pull through. When I left for Paris, it wasn’t a sad goodbye at all.

I couldn’t wait to get home to my boys and I knew we would all be back again to visit in February. And that is what I am looking forward to now: another chance to be together, to hug one another, to laugh and make new memories.